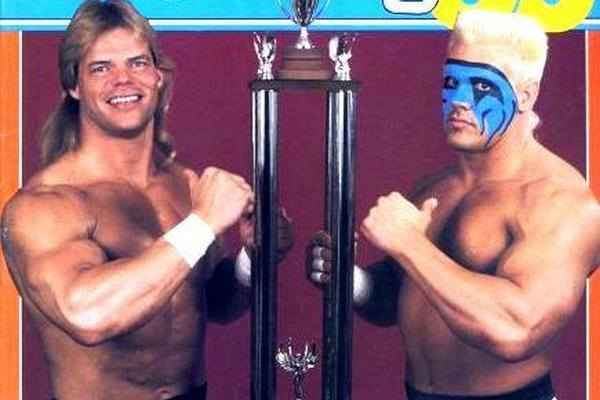 On the last Stick To Wrestling we discussed Thanksgiving 1987, with Starrcade and The Survivor Series. This week we discuss the fallout.

–The original plans for Starrcade ’86, and how it let to Ron Garvin winning the NWA title a year later.
–Could Tully Blanchard have headlined a Starrcade?
–Why the Royal Rumble, which has been a fixture for decades, was invented.
–How the NWA blew it with the purchase of the UWF.
–The first Clash Of The Champions and the giant impact upon the industry.
–Tully Blanchard attacks a defenseless Magnum T.A., and the Midnight Rider returns.
–The history of the Jim Crockett Sr. Memorial Cup, and how the Apter Mags have a major hint on who was going to win the 1988 tournament.
–Jim Herd and his good idea that eventually died of loneliness.
–Plus John tells the story of getting his photo taken with Dusty Rhodes.